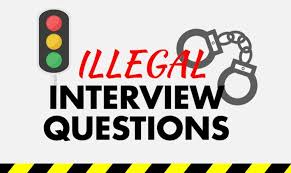 Did You Know Companies Can Be Sued For Asking These 9 Inappropriate Questions In An Interview?

Hiring managers use the job interview to learn as much about the candidate as possible. To do that, they ask lots of questions – including ones that may seem harmless, but are completely illegal.Recruiters with the company’s best interests in mind try to ask you for every detail about yourself that they feel would help them answer it.

However, there are a few questions that are off limits.

In case you didn’t know this, asking questions relating to a candidate’s personal life – age, race, religion, pregnancy etc. – is illegal in technical terms, says Mental Floss. The point is to defend job-seekers against discrimination based on these factors and to help make the recruitment process standardised and more importantly, objective. Take a look at the specific questions that fall in this category.

Attempting to dig into a candidate’s marital status or plans is utterly unethical, even if the recruiter seems to only be trying to get to know them better. Details of familial nature are by no measure an indicator of one’s professional ability and that is how they should be treated.

Whether or not one has or plans to have children may affect their personal lives, but as long it does not reflect in their work performance, it’s a detail entirely irrelevant to the recruitment process. A company could well be considered way out of line for enquiring about a candidate’s plans in this regard.

3. “How do you plan to balance your work and family responsibilities?”

This is one question in particular that finds itself strategically inserted into most women’s interviews. Juggling the roles of wife, mother and daughter doesn’t come easy. But questioning an individual’s ability to remain professional owing to these factors, simply because she’s a woman, is not only acutely sexist, but grossly unethical.

Apart from confirming that a candidate is above 18, this question has no place in an interview because it is in fact against all norms of propriety to discriminate against people above 40 years of age. Asking someone more mature about their age could be a possible indicator of such age-based discrimination.

5. “Do you have any disabilities or health problems?”

If the job you’ve applied to is one that is physically demanding, the interviewer reserves the right to tell you what exactly the job requires of you and then ask whether you can meet those requirements. But any health-related questions outside of this context are considered highly inappropriate.

6. “What are your religious affiliations?”

There should be no religion-related talk in an interview. It’s as simple as that. Religion is a personal choice that you don’t have to, and shouldn’t discuss in a professional setting. Discrimination based on a candidate’s religious tendencies is gravely unethical and if faced by the question, the only appropriate response would be, “I prefer not to discuss my religion, but I can assure you that it will not interfere with my doing this job.”

While an employer is entitled to asking whether or not a candidate has been convicted of a crime, their arrest record is off limits. A candidate is not obligated to discuss their arrest history with a recruiter, though employers often do their own research on candidates and at times uncover incriminating details. In such cases, being upfront about a criminal history may be a good idea to establish that it is a thing of the past.

As long as a candidate is authorised to assume employment where the job is located, it should be irrelevant what country they hail from or whether English is your first language. One’s nationality has no reflection in their job performance and this question is illegal for that very reason.

Unlikely to come up in an interview at all, this question has specifically been categorised as illegal in an interview setting to protect those who may answer it with, “No.” It protects the identities of recovering alcoholics, thus defending them against unethical treatment. Additionally, while one may ask whether a candidate is currently using any illegal drugs, it is against the law to ask them when they last used them.

So the next time you walk into an interview, know your rights.

No tension if there is financial crisis after retirement! Invest in this plan