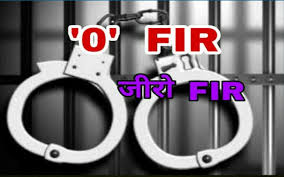 What is Zero Fir? How, where and when to use it.

Relatively unknown to many zero FIR is a step was taken in the right direction by the government, where it went out of the box to make the laws of the country more flexible and convenient to the people

What is zero FIR?

Zero FIR, in simple terms, means that an FIR can be filed in any police station, irrespective of the jurisdictional limitations and location of the incident.

The respective police station takes in the FIR and marks it as a zero FIR by giving it serial number zero and immediately transfer the documents over to the concerned jurisdiction.

This has somewhat reduced the need for people to travel to the respective jurisdiction back and forth to file a case.

Zero FIR was introduced after the recommendation from the Varma Chatterjee report and led to the amendment of the new criminal law act in 2013.

How did it work?

Before its introduction, the police refused to handle or file cases outside their jurisdiction. This made it uncomfortable for many.

After the introduction of this FIR scheme, the central government has also recommended the state governments to make appropriate changes in their local law’s that they can fully accommodate zero FIR.

This was primarily introduced to reduce the delay in solving/fighting a crime and avoid wasting time which may lead to the offenders fleeing their locations before the law reaches out to them.

Failure by the police officer to file zero FIR will make him, eligible for imprisonment under section 166A. The imprisonment time can range from 6 months to 2 years, depending upon the level of complexity/severity of the committed incident.

How this concept works:

The acceptance of Zero FIR by police stations

The police officer may actually try to divert you to the jurisdiction of the incident, but by law, he is fully capable of accepting the FIR and if he refuses to accept the FIR he will have to face strict actions.

Sometimes the officer may refuse to file an FIR on the ground of suspicion or on the grounds of the case credibility, this is also not permitted by law as it states that an FRI should be filed no matter what.

Similarly, if the person who is trying to file the case is guilty on the same grounds if he raises false claims in the FIR.

With the increasing incidents of Rape, murder and other incidents, it is very necessary for the authorities to take quick and effective action to find out and catch the offenders. This will also help in giving less time for the offenders to destroy any potential evidence which they might do.

A zero FIR helps the police to make swift and immediate action regardless of the jurisdiction.

Like any other rule, this one also has a bad side, now even if the case is transferred to the police station under the jurisdiction, the authorities will act lazy if the offender has influenced them in any manner.

Another disadvantage would be the outcome of the preliminary investigation. This is fundamental to a case and if this is done with regard to the so-called, victim alone, the case will most probably end up being one-sided and biased.

Although this can be avoided to an extent by continuing with the case and a good investigation team, the preliminary investigation still has a great influence on the overall outcome of the offense committed.

Overall, the concept of Zero FIR and its implementation by the government is a great sign to the country in general. This is helped with crime fighting and empowered women to take the right action against offenders.

It was also implemented in a good manner by the local authorities. But for the law to be more successful, it should be brought to the eyes of the general public, even in 2018 many don’t know what this concept is all about. Legal awareness campaigns can be a great way of letting people know about the new rule.

A suggestion to the rule would be to provide a state wise or district wise committee to assist the police station in finding the credibility of the cases and also to help the victims, get their justice quicker.

Such a committee would also help the respective police station to transfer the cases quicker.

With the advent of some of the most brutal rape cases to date, this law is still not enough to fight of crimes in India. Along with the law for initial investigations, the punishment for such criminal offenses should be stiffened so that attacks on young children and women will reduce.

How to Sue an Employer for Wrongful Termination ?